A few years ago, I wrote a little perl script that would fetch forecasts from the National Weather Service and format them for inclusion in an Emacs diary, so you can see the weather along with your appointments. I'm not using Emacs diary anymore (I'm a sucker for Apple's iCal, I guess), but recently a thoughtful fellow named James contacted me with some enhancements to my script:

I had to make a few changes to make it compatible with my emacs setup. First, I had to replace percent signs with the word 'percent'. Then, I had to stop the script from wrapping words, as my emacs setup takes care of it, and the script was conflicting with the emacs word wrapping. I turned these two changes into user-configurable options in the perl script. I've attached the changes in case you want to distribute an updated version. I'm not the only one who needed to make these changes (a colleague I gave the script to needed it as well).

Here is a link to the updated script, and a screenshot that includes today's weather. Enjoy! 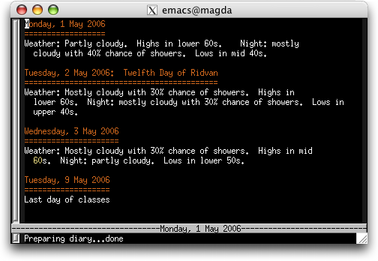