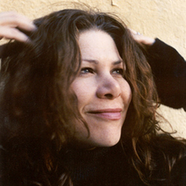 Dayna in Spain, by Ana Bol. This is a link to her web site. 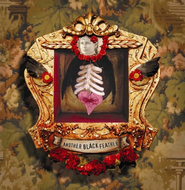 The new album: Another Black Feather (linked to amazon.com).

We went to see Dayna Kurtz last night at Joe's Pub. This was a release party for her new album, Another Black Feather

. She has a rich, amazing voice and presence. The words ‘husky alto’ spring to mind. It's a cliché to call an artist you like ‘hard to categorize,’ but with her I really think that's true. There's some blues, some jazz, some folk. On this album, even a little bit country.

I first heard Dayna on NPR when Beautiful Yesterday

was released. I love that album, but it is almost entirely covers of other people's songs. Incredibly original covers, to be sure, but her own song-writing is brilliant. Or so I would learn later.

In March and April Dayna played two weeks in a row at the Living Room in the East Village. As its name suggests, this is an intimate space: about 25 people and the girl with the guitar. At these sets, she mostly played songs from the upcoming album, and I fell in love with most of them immediately. At Joe's Pub last night, she played with a 5-piece band, and there were probably more like 120 people listening.

The most touching song, for me, is Venezuela, based on a dream Dayna had while in Spain. In the dream, she wakes up in Venezuela, where a nice man tells her he's been waiting his whole life for her, and they're meant to marry. She has to break it to him that she's already spoken for… in another dream. Here are some excerpts from the lyrics:

He approached me like a prince,
Said he's loved me all his life.
He said he knew that I'd come here,
He's been waiting all these years,
And I'm meant to be his wife.

Oh Fernando, I'm so sorry.
Whatever could I say?
To a man I've never met
who's the one who got away.

I cried to see his heart so plainly —
For he was such a formal man —
Handed to me like a daisy,
In the presence of my family,
From his damp and shaking hands.

Oh Fernando, I'm so sorry
For the love you saved for me,
But my heart is locked forever
In another lovely dream.

I have to admit that the performance last night had me crying a bit into my Malbec. The line “Venezuela looked like Brooklyn” always gets some giggles though.

The most rousing song is It's the Day of Atonement, 2001. The angry-girl-with-guitar version at the Living Room was actually a little more powerful, and had all 25 of us erupting into spontaneous cheers. The version on the album features a klezmer band though, which is clever. Some excerpts:

Mohammed is pacing when he isn't kneeling.
Jesus can't talk 'cause he's to busy weeping.
Yahweh is a mother who sighs at the ceiling.
If only they knew how good it could have been!

It's the day of atonement, 2004.
Would Jesus be happy? We evened the score.
You hypocrites, bullies who profit from war:
May your gods all spit on your graves.

I say, all of you gods tell your squabbling children,
Whatever their color or call,
They can all go to hell if there is such a thing.
Go to hell, have it out, have a ball.

There are some other gems. The story behind Banks of the Edisto is touching, especially as she told it in her April 5th set. I'll have to spend some more time listening before writing about the other tracks.