Ever since I was eight years old, a succession of piano teachers have told me I have ‘perfect pitch’. Such pronouncements invariably followed a brief, poorly-controlled test wherein I turned my back to the piano and guessed whether the teacher had played C, F♯, G, B♭, or whatever. I could do this semi-reliably, though not very quickly. As a parlor trick, it would do. Much later, I heard of people that could instantly name all the harmonics in the screech of a car's tires. My ability was never to that level, but still I assumed that what I could do qualified as perfect, or ‘absolute’ pitch.

So when I heard that there was a pitch study at UCSF with an online test, I jumped at the opportunity to try it out. And I failed miserably: 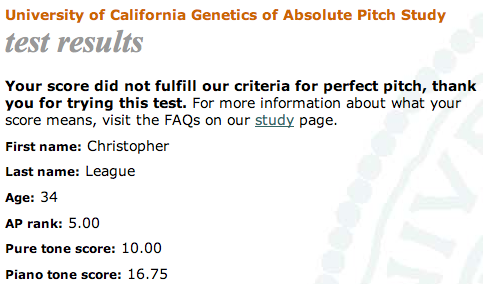 If I interpret the scores correctly, it basically means my pitch recognition was useless – bottom quintile or so. Half the tests were with pure tones (sine waves), while the other half were piano tones. I did significantly better with the piano, but still pretty miserable.

So what's going on here? Maybe what I have is just relative pitch (recognition of intervals, not absolute pitches), combined with a fairly reliable memory of what ‘middle C’ sounds like on a piano. And in my defense, I hadn't even touched a piano for a few weeks before taking this test.

But still I think it's more than that. I can hardly play my digital piano when it is set to transpose everything even a half step up or down. Unless I concentrate very hard on watching my fingers on the keyboard, I make many mistakes because the pitches arriving in my ears do not match the keys that I know I just played. One would think that difficulty playing on a transposed keyboard is a hallmark of absolute pitch.

Luckily, I found a more friendly and configurable pitch tester hosted in Japan. You can specify how many octaves and which keys to test. I can do pretty well if you stick to 1.5 octaves of white keys: 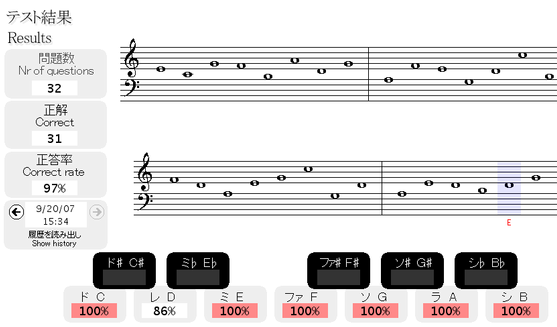